Working on a new pair of dragon scale gloves. I'm still in debate whether or not to make them short or long. I really love this combination of colors, really makes the green pop. 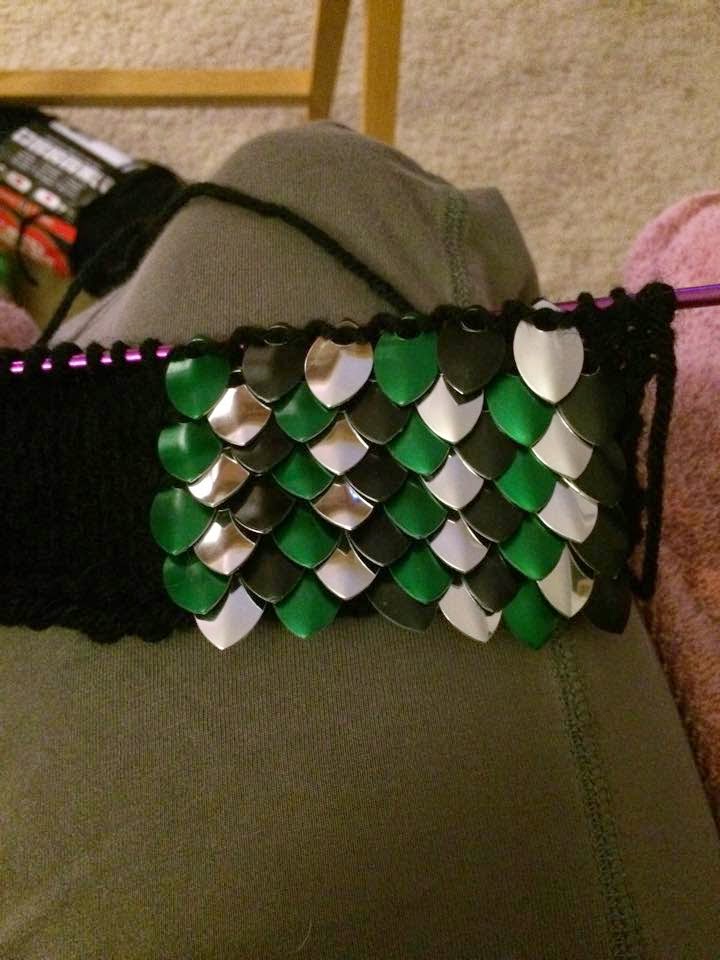 Yup that's right, I like so many others have jumped on the Dr Who bandwagon and all because of Netflix.

In January I finally broke down and started to watch the series off of Netflix and I was HOOKED.
Last night I finished watching everything, and now like everyone else, eagerly awaiting for Season 8 to start, and to see how the new Doctor will turn out.

I was sad to see Matt Smith leave,  and yes he did make bow ties cool again. I'm hoping that the new Doctor (Peter Capaldi) will bring his own flare, he has really big shoes to fill, and to make the Dr his own.

Why do I like the Dr. so much. Why does anyone like the Dr so much. Is it the writing of each episode? Yes without a good script it's would be a crap show. But what I love about the Dr. is you get whisked away to so many places and times and it just makes you wish that you were his companion. What or  where would you go if you had a TARDIS.  For the time that I sit and watch Dr. Who, the world disappears.

I can't wait to introduce my daughter to the Dr.

Being a Long Distance Family - Rant

Many families living in Victoria have to deal with an issue that not many talk about, and that is many families are separated because one of the spouses or family member have to leave to find work. Yes we hear about how there are jobs in Victoria, blah blah blah.. but unless you know someone who knows someone forget it. Or your promised a job if you get the right ticket, and once you get that ticket your completely ignored by the people that promised you the job in the first place ( which has happened to a friend of mine)

It's so frustrating to not know when I will see the love of my life again, it's hard on my daughter as well, all because no one would give him a chance, an opportunity to show what he can do. That he is a hard worker and isn't afraid to get his hands dirty.

I found it funny that it was a headhunter who tracked him down from a 3 year old resume that had all his old information on, and was determined to have him for this job.  I find it odd and frustrating that a company wanted him badly enough to fly him to Calgary yet no one here (cough cough engineering firms) wouldn't even look at his resume, even thou he helped restructure many well known buildings heck even our lovely Empress, when it was required to be updated in the electrical field. He has knowledge of many different fields including solar energy and diesel engines and how to integrate this technology. But do you think something like this would be useful for a company... I would have thought, but GUESS NOT.

Am I frustrated.. YOUR DAMN RIGHT, so now time is ticking down to when he has to get back on the plane in a few hours and head back to Calgary.  At least we know that my daughter and I will get to see him again at the end of July.  Right now he tries to fly back ( if plane ticket cost is low) about every 6 to 8 weeks, and only gets about 4 days ( if he comes on a long weekend) and then gone again. Saying good-bye doesn't get easier, if anything it's getting harder and harder.  I miss my best friend.

Coming soon.. me and my new vacuum

What happens when life just takes off? It's been a crazy few months and I have been busying being a working single mom.
With spring finally here it's time to let the hair down and get the motorcycle moving. She has a new heart ( battery ) installed in her! 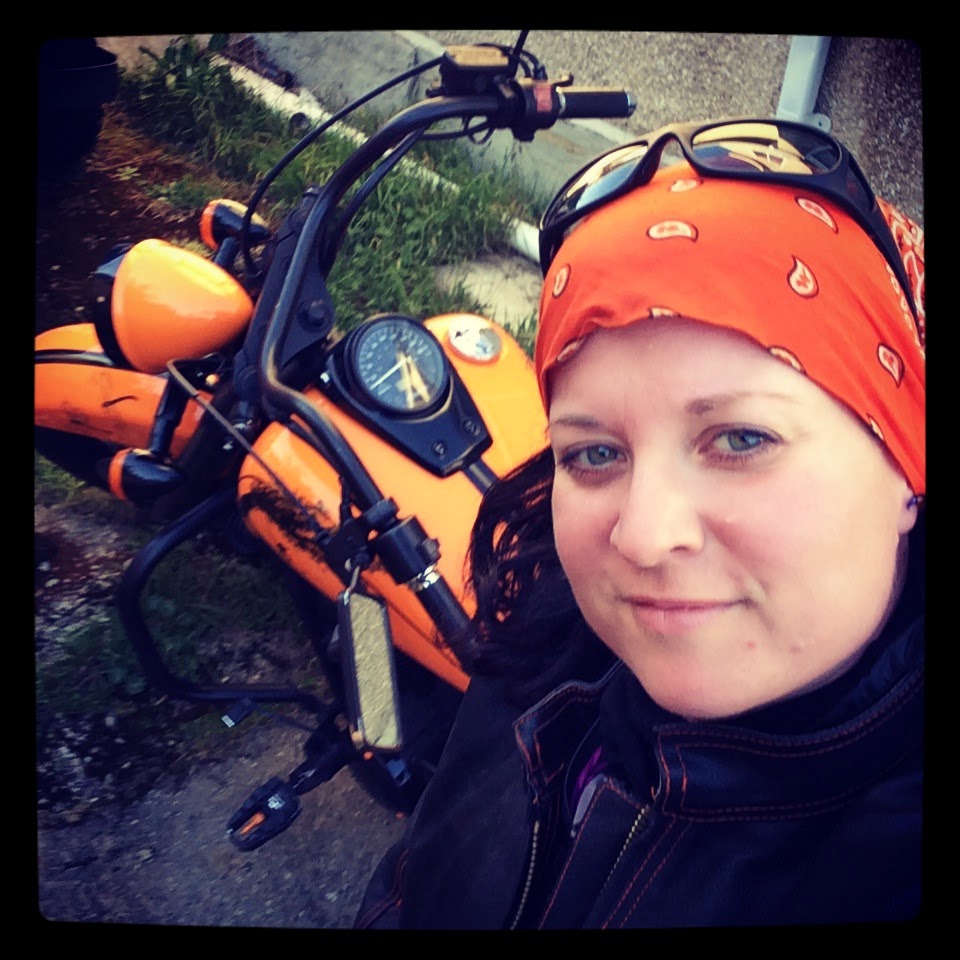 There is nothing like two wheel therapy! I know there are people who don't understand why I ride, I ride because when I am on my bike it's just me and the wind. I feel freedom when I ride, like there are no chains of life.

In the past month we have added a new member to our family. Her name is Dulce. She is a long haired dachshund. She is a real sweetheart, and feels like she has always been apart of our little family. She is a rescue dog and slowly we are teaching her how to be a dog. 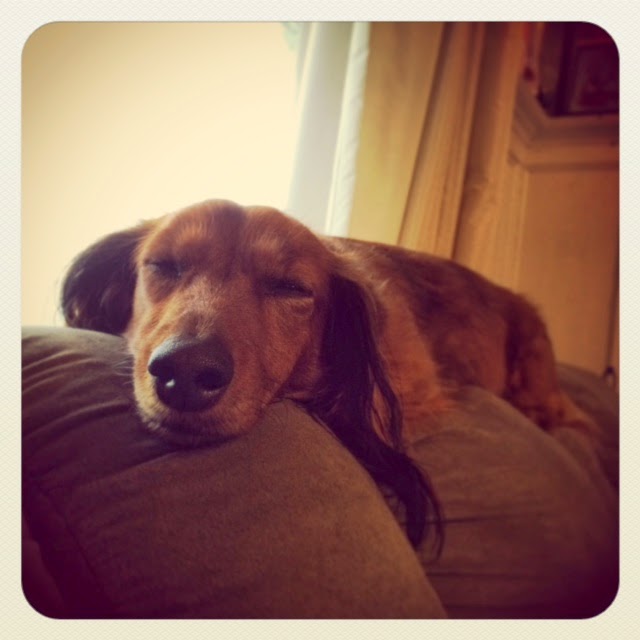 Adele is growing up so fast, it's hard to believe that she is 6 1/2 years old.. I have asked her to stop growing, but she laughs at me. 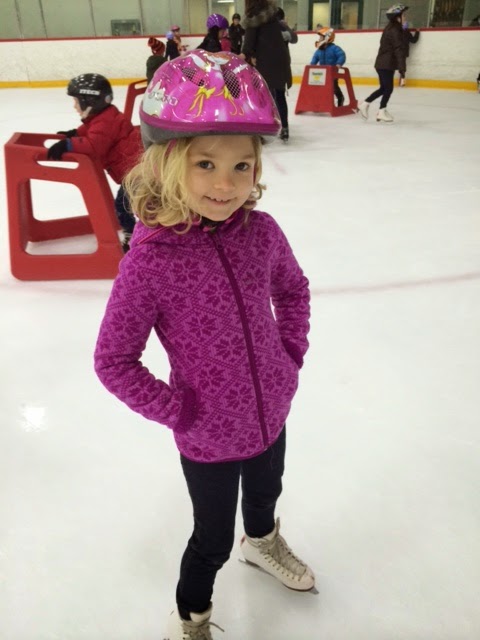 and lastly on the creative side... I have been working with dragon scales.. yes that's right dragon scales!! I have taken up knitting and have been adding the scales to fingerless gloves. I am pretty happy with the outcome! My sister and her boyfriend will be selling my creations at the Calgary Comic Con in April. 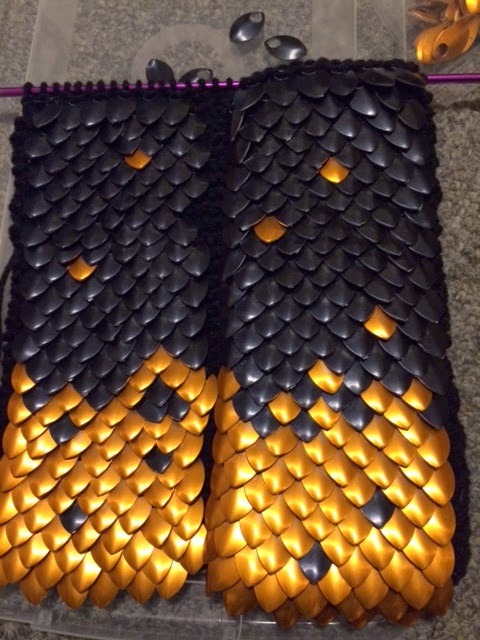 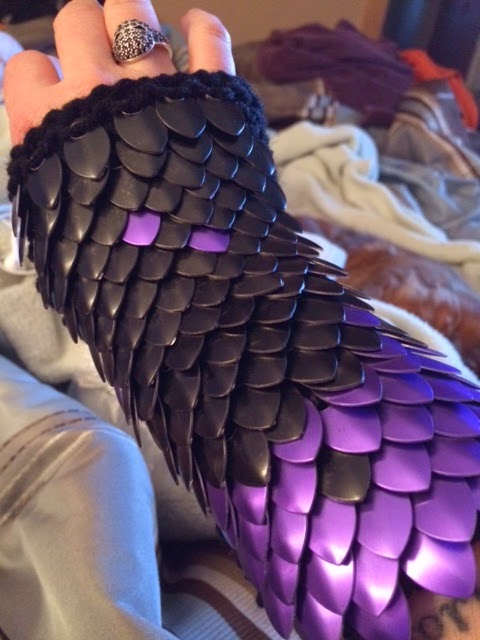 I love wearing them, and the scales are so soft! I have been stopped a few times asking where can one get a pair, then explain I made them! I'm pretty proud of these.

So that is a very fast update of what has been going on.. I plan to do more blogging again, so much to share!!!