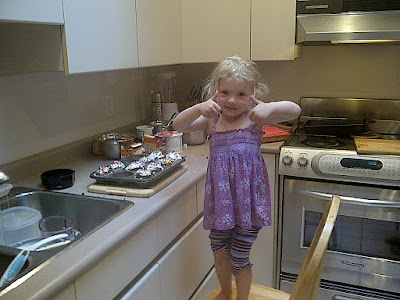 Me and Adele - and the great debate.. HOW much icing to put on a cupcake! 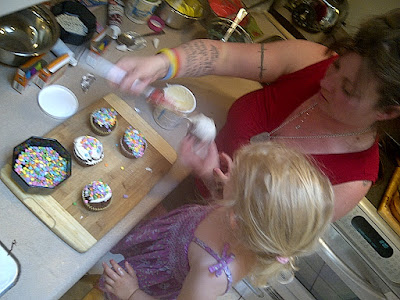 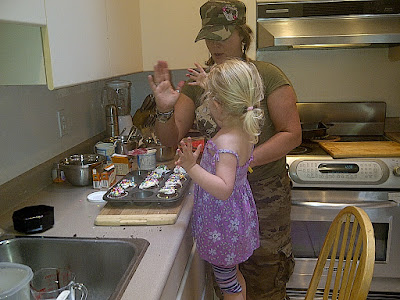 Dig the eye ball!! Nice and puffy, but that didn't stop her! 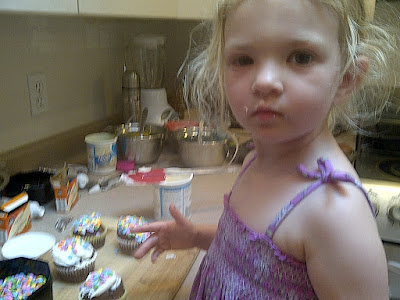 We went to a friends place, and she layed out the paints for Adele to have fun with. I found myself needed to step back, and let her do her own thing.. as an adult we tend to want to correct and direct ... i'm glad that I went to the other side of the room and just watched.. 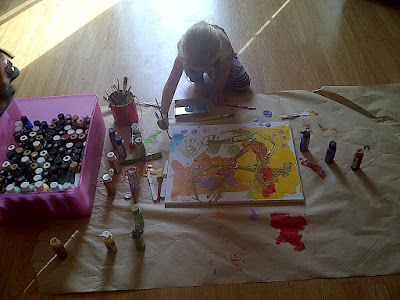 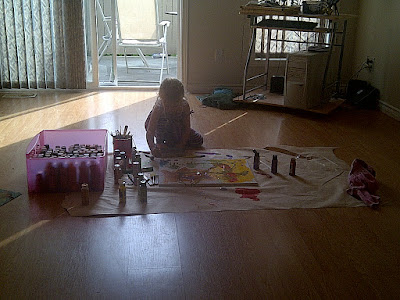 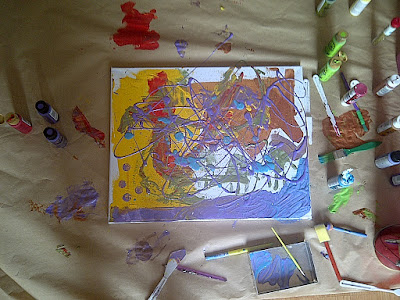 I'm so tired.. insomnia is so cruel..
It's been a few nights since I have truly had REM sleep.. and it's really starting to take a toll on me..
Tomorrow I get my little one back for the weekend, first weekend in three weeks I get her. I am looking forward to it.. but hopefully I can get a good night sleep tonight.. here is hoping!!

because of the recent activities of the past two weekends, I have had a total of 2 days with my little one.. My Ex took her to the mainland last week and I haven't seen her now for 5 days.. last week it was 4 days.. This was also my choice and decision....

I have been missing my little one dearly, especially with all the events that have been going on.. when you just want to go home and hug her, I can't, when I need to hear her little voice, I can't.. This is the part of being a single parent that sucks, is having to share your little one.. There are silent rules that one follows to respect the other parents time. It's not easy, not easy at all.... But I respect the silent rules.
Posted by Unknown at 2:11 PM
Missing
2011-06-20T14:11:00-07:00
Unknown
Comments 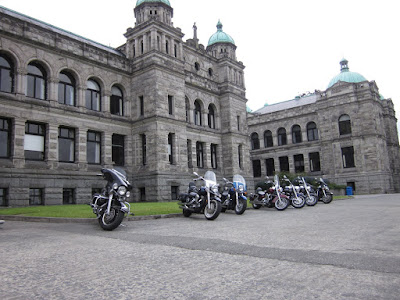 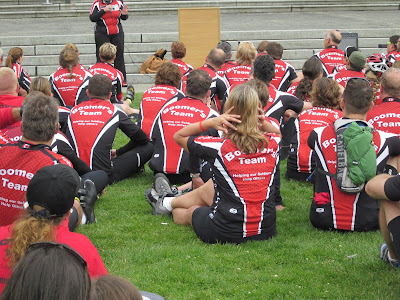 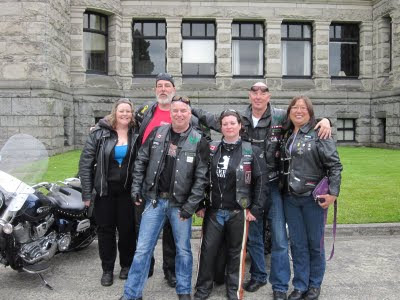 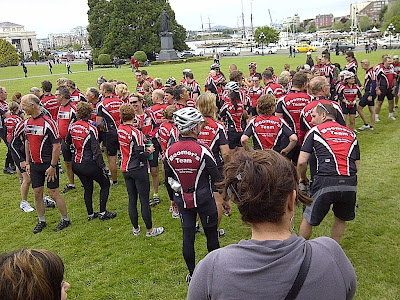 Rimini was approached by Maureen Eykelenboom if we could escort the over 90 cyclist that would be cycling from Comox BC to Victoria, who raised funds for "Boomer's Legacy".

6 Rimini Members ( Uncle Stew, Mily, Tazz, Goody, Diesel, Jelly Bean) Waited for the cyclist to get over the Malahat and began escorting the riders to the Legislative Grounds in Victoria.

It was truly a moving event, and at moments when you could see the exhaustion in some of the riders, I watched a stronger rider would place a hand on their back to keep them going.. truly a touching moment..

Arrive at the destination - many hugs and cheers were given.Jane Nuttall was there waiting for the team ( she lost her son Lieutenant Andrew Richard Nuttall 2009.12.23)

As speeches and thanks were given, one moving moment when Maureen introduced Jane, she was standing alone, and as Mily and I turned to see she was alone, her and I walked over and made sure she wasn't, and that she knew we were there for her and she was appreciative.
There are no words...

When time for the group photo all cyclist were asked to sit on the steps, and Rimini was asked to be in the picture.. lets just say we REALLLY stood out!!!!

We were also invited to partake in the after party and supper..
Upon arriving - had a tasty beverage from Howe Sound Brewing of Squamish, British Columbia new beer, Boomer's Canadian Red Ale. The Ale will be made only once a year and released during remembrance day.
Supper was amazing, Maureen gave thanks to everyone who helped including Rimni.

On a side note : These past two weekends have been emotional and I wouldn't have missed it for the world. Ride for the Fallen and Boomer's Legacy.. How loss and tragedy can lead to such positive energy. I have never been more proud to be a CAV memberTo have a silver cross mother thank me and the rest of the crew for being there even if it was just a shoulder the lean on.....
There are just no words....
Posted by Unknown at 8:11 AM
Boomer's Legacy
2011-06-20T08:11:00-07:00
Unknown
3rd CAV|Boomer's Legacy|Rimini|
Comments

Ride for the Fallen - Link to pictures

So as promised here is the link to some of the pictures I took of this weekend
Again I've had to look and go threw 2736 pictures..

Ride for the Fallen

So enjoy.. and again it was a privilege and an honor to be apart and capture this threw my camera
Posted by Unknown at 10:31 AM
Ride for the Fallen - Link to pictures
2011-06-14T10:31:00-07:00
Unknown
3rd CAV|Highway of Heroes|Ride for the Fallen|Rimini|Ubique|
Comments

Rde for the Fallen 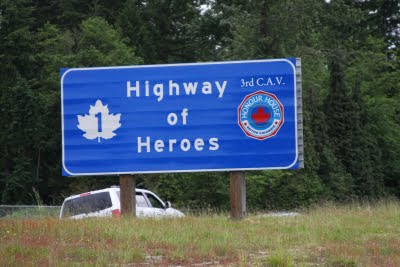 There are truly no words to express how I feel after this weekend. Joy, Sorrow, Excited, Teary, Happy, Sad.... This weekend I felt it all.. and this weekend I stood tall as a CAV member, proud to be apart of such an incredible family of riders.Brothers and Sisters all united to be supportive for our Silver Cross Families..
I took 2736 Pictures of this weekends events..
I had the privilege of meeting and being a shoulder to lean on for some of our silver cross families, and I feel I am truly blessed to have been part of it!
There are just no words.. no words at all..

We now have a Highway of Heroes, because of our Brothers of Ubique, but especially the hard work of Brother Brutus! Who is an amazing man, with a heart of gold.. and it is such a privilege to know him!

I have looked threw the many pics I have taken and will be posting a few up on the blog soon, as well as the link to the server where I have places a few..
Posted by Unknown at 10:59 AM
Rde for the Fallen
2011-06-13T10:59:00-07:00
Unknown
3rd CAV|Highway of Heroes|Ride for the Fallen|Rimini|Ubique|
Comments

Well since this weekend is going to be a very special one, I want to
be able to keep everyone informed!! So testing out blogging via my
Blackberry

--
Sent from my mobile device

RIde for the Fallen

I am sooo excited about this weekend's ride..
We will have a Highway of Heroes in BC, and I'm so proud that CAV will be a hug part of this momentum occasion. Brother Brutus from Ubique 3rd CAV has truly out done himself, and it will be such an honor to see and ride with him and fellow CAV members again!

Since I will be taking pictures, Apple Blossom is home, SIGH - and parked very nicely. It's kinda hard to ride ones' bike and take pictures of such an amazing event.. I don't want to miss a thing!!!!!

Flat Tire on the bike

I know now what happens on a bike when you get a flat tire.. and let me tell you.. it's an experience I don't particularly want to go threw again anytime soon.
The feeling of your back tire going flat creates this intense sound.. I honestly thought that it was my engine, then the back started to wobble all over the place.. I was able to get the bike and myself safely to the side of the road... Once I calmed my nerves.. I called work, and the guys were so awesome.. I fellow co-worker named Chris, hooked up the race car trailer and came and picked up. My bike got the royal treatment..Once back at the work, Chris was awesome, he removed the tire from the bike, and another co-worker suggested I called Peninsula Tire out here in Sidney.. They don't normally do motorcycle tires, but was so amazing enough to fix mine.. SO THREE CHEERS to Peninsula Tires and Brakes out here in Sidney!!!!! Fantastic guys for fixing a girls bike tire!!
Then another THUMBS up to Chris for putting my back tire back on.. which allowed me to ride back home..

I'm not gonna lie, I'm a little more paranoid now, and listening even more so to all the sounds that the bike makes. But I am truly grateful to everyone that helped me on Monday.. and that I did not have to experience a ride in an ambulance and made it home safely...

Last Sunday, a group of us joined the Ride to Live - the funds raised went to Prostate Cancer research. Prostate Cancer is what took my father away from this world so this event was very close and personal.

The bikes lining up at Steve Dranes Harley Store.. to get the event going 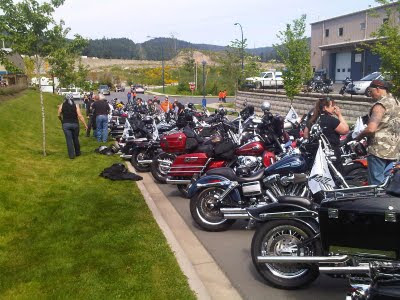 Our third stop was at the Casino In Colwood 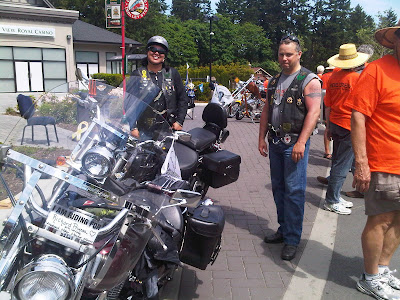 Waldo, me and Omlette 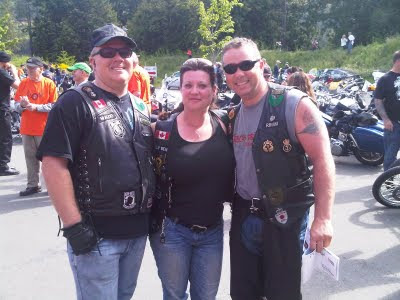 I want to Thank Mily, Omlette, Waldo, Fergie, Tazzy, Fuzzy, Hawaii, and Dave for being such a fantastic group to ride with. But most of all I want to thank Mily, for being a shoulder to shed my tears on, and for her incredible support in everything that I do!
Posted by Unknown at 8:57 AM
Ride to Live
2011-06-08T08:57:00-07:00
Unknown
3rd CAV|motorcycle|prostate cancer|Ride to Live|
Comments

How Adele was named

I have been asked how did I chose the name of my little one, was she named after the singer.. and I thought well now is a good time to explain.

When I was 16, I had a teacher named Remi Maisonneuve. He was our computer teacher, he was the one that allowed me to explore and test out computer programs in high school, aka the beginnings of Photoshop, and a hand held scanner. He always encouraged me to test and look outside the box.

He had three kids, Sarah, Joel and Adele. I used to babysit the kids as well, and always loved the name Adele from the moment I heard it.

Time moved on, and graduation, then I moved away from the area, but I always made a point to say hi to Remi, when I would go home, and tell him of where my computer knowledge that he first started was taking me.

Discovering that I was pregnant then realizing I was to have a little girl, many names came flooding to my brain. Angelina, Isabella, but none seemed right.. then one night as my little person rolled in my belly, the name Adele came racing to my brain.

I never had the chance to tell Remi, that my daughter was actually named after his, as he and his family moved away, but perhaps one day I will get to tell him... how one person can influence even years later!
Posted by Unknown at 1:25 PM
How Adele was named
2011-06-02T13:25:00-07:00
Unknown
Comments